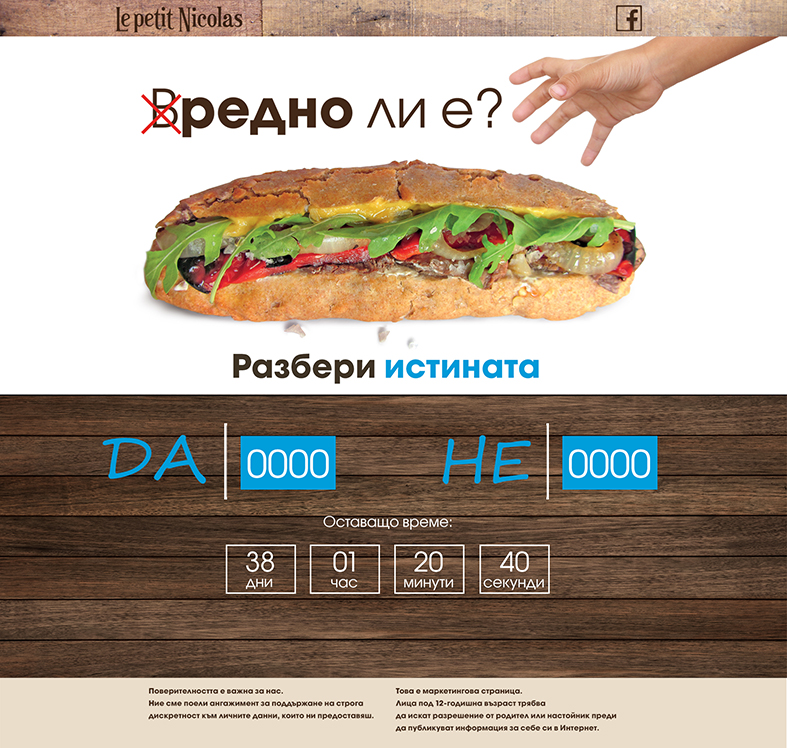 Little Nicolas was just an idea when we first met our clients from “Le Petit Nilocas”. The concept was intensive, the time – limited and we took the challenge to build a brand from zero to give it a life, to present it with the dignity the concept deserved and to leave when the client was supposed to proceed by himself.

The concept: Creating a center for kids and adults that combines the triple concept of: 1.café and eatery with lunch menu, healthy fast food and catering for kids parties; 2. indoor playground for kids with personal attention to the kids, fairy /fabulous/ interior from wood and the only place in Plovdiv that kids can play under the secure real-time video surveillance and be watched by their parents;3. English learning center Helen Duron – global institution mainly well known in Sofia and in more than 30 countries around the world. The concept of the eatery was serving fresh and healthy food – which is not offered by any other child center in the city of Plovdiv, most of them usually serving frozen french fries and different ready-to-cook foods like chicken bites, which every kid loves to eat.

1. Build and impose a new brand and logo that clearly and easily communicates the mission and the vision of the business model.
2. Develop a full communication campaign before the opening of Le Petit Nicolas.
3. Working on a new corporate website with an online store, through which the customers can order food for home or to reserve it for takeaway.

1.Work on building a brand – creating logo and identity

Our work on researching and creating a conception for new brand vision began with 3D visualization of the interior design of Le Petit Nicolas, which was a mix of a rustic style, felling of a French bakery, modern interior, and innovation. Inspired by the concept we created the little character of Nicola in traditional colors, filling the interior and the spirit of the place. We created a slogan and key message for each activity of the center. We had only two months, during the renovation process of Le Petit Nicolas, we announced the coming opening with posters with visualization of the interior and we proceed bravely ahead. 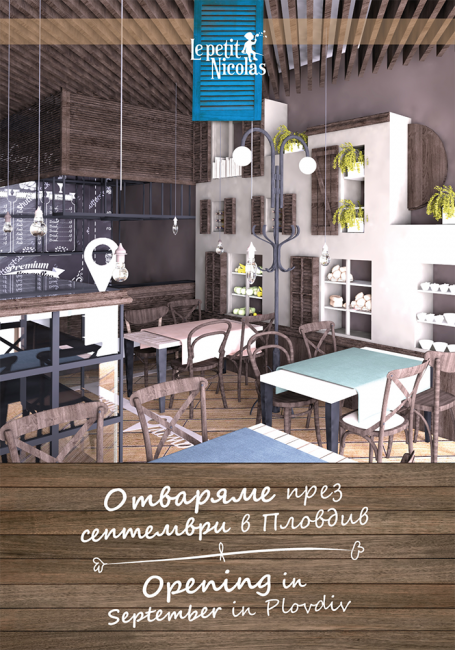 2. Creating a campaign – why, what and how we did it

The place was different and the target of the type of services provided was quite a different from the traditional target of kids’ centers. First of all, we needed a “carrier” from the three different services for kids, which Le Petit Nicolas combined and we unanimously decided it should be the food.

We had to reach the parents, who would never encourage their kid to eat in the popular fast food chains to get a toy. Parents who consciously make an everyday choice to eat healthily – they often prepare their own food for the kids, shop high quality and fresh products, keep and cook the recipes from their parents and grandparents. And because we did not just offer bio or vegetarian meals but fresh food, made by products with a verified origin, we decided simply to tell it and show it. Before that, we wanted to make some noise and we came up with a teaser campaign with a running period of  2 weeks via offline and online communication in Plovdiv to ask the target group – “Is it wrong?”. We took a picture of a sandwich, which Le Petit Nicolas intended to offer to its clients – with its own baked leaven bread, fresh vegetables, and cheese. We didn’t photoshop the photo but just added a reaching kid’s hand and asked the question “ Is it right or wrong for a kid to eat sandwiches?”.

Several billboards on the main junction in Plovdiv with a lot of traffic and bored drivers were inviting the customers to visit the website and decide is it wrong or right for the kids to eat sandwiches. Our preliminary tests on the target audience gave us the confidence that the slogan and the visual would provoke huge interest and would arouse the imagination and the different assumptions about the service Le Petit Nicolas offers and what kind of message it was conducting to the user. The opinions varied from a social campaign against children’s obesity to new place for fast food and so on.

When the user comes to the landing page from the teaser campaign, which was active for 14 days, the users had the option to vote on whether it is right for the kids to eat sandwiches or not. After the vote, their choice was shown in real time voting on the landing page. We had previously added Facebook pixel & Google remarking codes to the landing page, so we could have the possibility to displayed the result and to reveal the truth after the end of the voting.

*Link to the landing page at the end of the campaign: http://nicola.bg/index_landing1.php 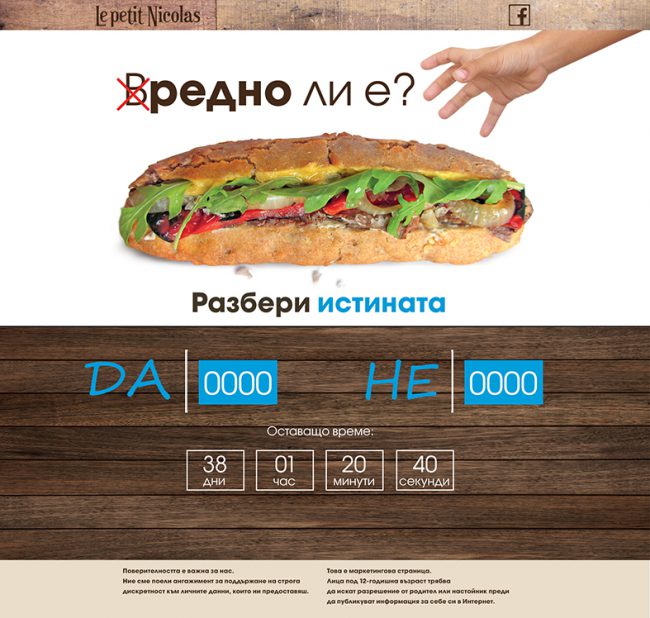 We consciously delayed the release of the Facebook page and we did not plan any publications before the start of the campaign. We used the main visual for video cover and created a set of animated post and carousels in which we also asked the social media users in an attractive way. We precisely selected the audience and kept an eye on responses to our message of the different target groups – residents of the housing complex, in which Le Petit Nicolas is situated, women with kids from Plovdiv and users interested in healthy eating and quality food. 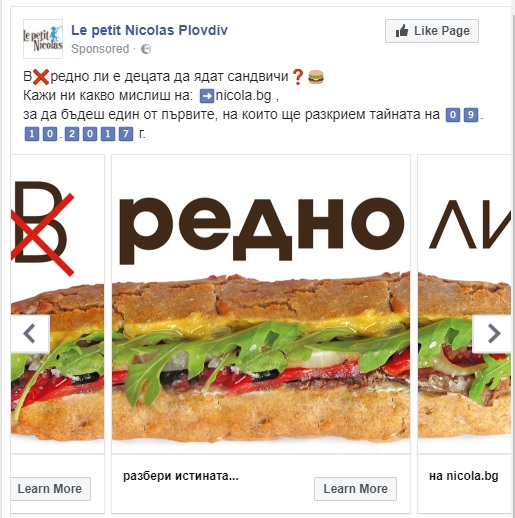 And after we had managed to reach over 20 000 unique users from Plovdiv and the region online, and hopefully that many – offline, the time to reveal the truth came or in other words – it was time to announce it is right for the kids to eat sandwiches and food, which is fresh, homemade and prepared of products of proven quality.

We announced that it is RIGHT to keep our promises and that Le Petit Nicolas does it. From 2347 voted, the results were almost equal. And we exposed that it is right to have a bit of tasty and healthy snacks. We made sure our message reached all those who were already engaged in the campaign by using a remarketing campaign on Facebook. At this moment we also unveiled a new landing page, which was not only to show why it is right for kids and adults to eat at Le Petit Nicolas but in a definite and honest way we presented the worth of the brand and its promises. In this stage of the campaign, we also revealed the other two components of the project-  the kids center and the English learning center Helen Duron in Plovdiv. We had previously worked on the online communication of the school and we did a VIDEO to present the kids center and its advantages. Through our two-step campaign, for a period of time of about a month, we managed to reach all online potential users of the brand in Plovdiv and around at least 2 times and most importantly – to create a teaser a campaign people will talk about and thus convey the brand’s  idea. Yes, kids could eat good sandwiches, potatoes or chicken nuggets, if the products are fresh and the food is cooked in a healthy way . Le Petit Nicolas became a favorite place for eating, playing and children’s parties from adults and children!

Minimalistic, dynamic and inspired by the brand concept – see it here: http://www.nicola.bg/new/ *